As I was eating my lunch and going braindead, I surfed through NPR.org the other day.  I came across this post of an interview with a regular watch.

I shared it with my students this morning in my writing workshop intervention class.  My students enjoyed it and had fun playing with the idea.  I wrote alongside them and this is what happened.

What are you doing in that box?
She put me here. 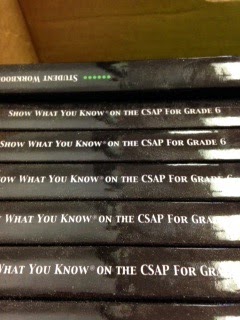 Why?
I guess the children don't need to prepare anymore.

I'm sure they need to prepare for something.  Surely they could use you.
I didn't ever think that I'd dream of being used.  It used to be that I hated hearing my classroom cupboard open.  The children hated me so much.  All I would hear would be their negative comments.

They really were negative?
Of course. What middle school student or teacher for that matter wants to spend days looking at me.  Let's face it, I'm boring.

Boring or not, don't they need you to prepare?  Don't they still take tests?
From what I can tell stuffed in this box, they are taking the next new test, PARCC.  Before that it was TCAP.  The kids called it T-crap.  I kind of agreed with them.  I don't even like myself.

What is this PARCC test?
I don't know.  Just thinking of it makes my letters quiver and pages krinkle.  There is something new called the Common Core Standards.  From what I can tell they are more rigorous and will get the kids ready for their future better than the standards on my pages.  I'm just dumb.

You're not dumb.  CSAP was a tough test for most kids.  You're different that's all.
Different?  Is that supposed to make me feel better?

I didn't mean to insult you.  I'm sorry.  I feel for you I really do.
Listen I haven't been used for a few years.  For a while she just left me in my cupboard.  I look pretty good so I guess she didn't want to get rid of me.  But earlier this year she took me out and boxed me up.  I overheard her talking to some guy about me.

What were they saying?
They said that there wasn't a need for me anymore and I could get shipped to some warehouse or go in the dumpster.

So I guess you're happy that you are still just hanging out in the box waiting?
I guess so.  The bottom line is I'm worthless and done for.  It's OK because the people who choose these tests will come out with something new and eventually PARCC test preparation materials will be hanging out in some box next to me.  We'll be friends someday.  It always works this way with schools.  I was the the "in thing" before and now I'm not.  The same will be true of PARCC someday.